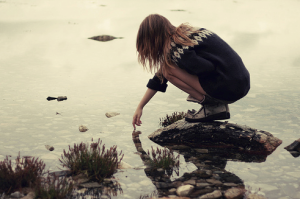 Once upon a time, there was a young beautiful girl whose home was close to a small lake. She used to go out to the lake everyday and contemplate her reflection in the still water.

One day, she decided to take her younger brother with her, and while she was reflecting on her image in the water, arranging her fine hair, her brother took a small stone and threw it into the lake, resulting in waves. The young girl’s reflection was distorted. She became angry, and started an effort to stop the water ripples here and there using her hands, but to no avail.

An old man passed by and asked her what the problem was . She told him the story, and he offered to help. He said,  “I will tell you the only solution that stop the water ripples, but its very difficult”. She replied, “I’ll do it, whatever the cost”. Very calmly the old man replied, “Just let the lake be still“.

Moral of the story

We often become so accustomed to the status quo that the slightest change or the smallest problem we face disturb us. Not only that, but when we try to solve the problems we’re facing, or fight the change we’re experiencing, we tend to make matters worse.  We can surely give it a try once or  twice, but when we notice a deterioration in the situation, just letting things be, could bring normality back. Being patient, and giving a chance to time is sometimes better than intervening.